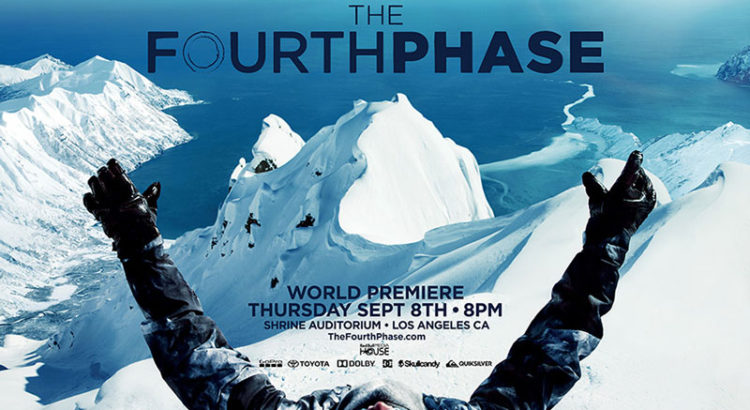 Montreal, QC – Travis Rice is back with The Fourth Phase, the follow-up to 2011’s phenomenal Art of Flight:

“This hydrological cycle, it’s this beautiful choreographed cycle of life.  I realized by combining my love of the ocean with my love of the mountains, it might be possible to actually follow the flow around the North Pacific.” – Travis Rice

The premise to Art of Flight‘s sequel is an exploration of the hydrological cycle – the evaporation of water from the surface of the ocean to the condensation of clouds to the precipitation of rain and snow and finally to the runoff of water back into the ocean. While exploring the Wyoming back country in 2013 with his mentor Brian Iguchi, Travis Rice comes up with an idea. He plots a 16000-mile journey to follow the water cycle around the Pacific and snowboard along the way. Along with several legendary snowboarders, Travis Rice attempts to “witness firsthand the many moods of the North Pacific storm engine”

“Travis took this idea about the hydrological cycle and turned it into this epic journey.” – Bryan Iguchi

The Fourth Phase is a journey of self-discovery and an adventure to explore new terrain around the North Pacific. The film will cover breathtaking landscapes such as Russian volcanoes, the Japanese Alps, remote Alaska, and the Wyoming back-country.

The Fourth Phase debuts Thursday, Sept 8th, 2016 8PM at the Shrine Auditorium (665 W Jefferson Blvd, Los Angeles, CA 90007). Some of us at Powderheadz.com will be watching it locally in Vancouver, BC at the Centre for Performing Arts (777 Homer St, Vancouver, BC V6B 0H3) on Saturday, Sept 10th, 2016 at 8PM. You can see the Global Premiere on October 2, 9PM on RedBullTV or purchase it on Midnight, October 3rd.  More details available at www.thefourthphase.com and you can pre-order from vimeo, itunes, or amazon.

The last movie to get this much hype was 2013’s Into the Mind by Sherpas Cinema. The Fourth Phase is sure to be another classic that Art of Flight was back in 2011. This will be the perfect movie to get us all amped for what is going to be an amazing season.Winter is coming, and we can’t wait!

Tim is our Senior Contributor based in Montreal, QC. His home mountains are Mont Tremblant, Saint Saveur, and Mont Bromont. He's also the proud owner of Polygon Academy, a video game website designed to help people break into the industry. Visit his Youtube!

Tim is our Senior Contributor based in Montreal, QC. His home mountains are Mont Tremblant, Saint Saveur, and Mont Bromont. He's also the proud owner of Polygon Academy, a video game website designed to help people break into the industry. Visit his Youtube!